Out of the Blue Feature Article by Producer Michael Diamond 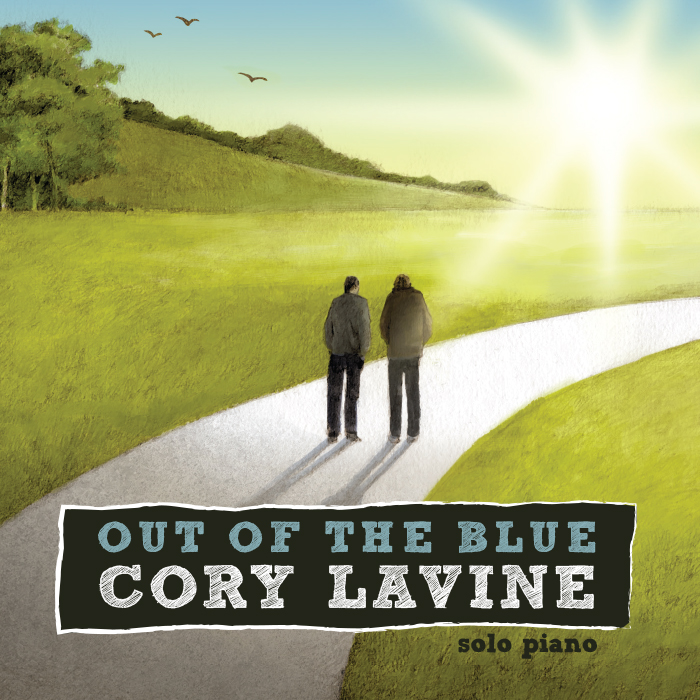 an Francisco based music journalist, recording artist, and music producer Michael Diamond has been in the industry for over 30 years. He is also a voting member of the GRAMMY’s. I was really excited last month that he was going to do a feature article about my debut album, Out of the Blue, which was recently released this past September.

Since I released this post back in November 2015, Michael had sadly passed away from a stroke on January 27, 2017. He was well respected in the music community. Especially those who were in the New Age genre. A genre that Michael loved both as an artist and as a journalist. I am really grateful for the short time that I got to know him, and with his review he did for my album on Amazon Music and also on his site, Music and Media Focus. His review is laid out here below and I hope you’ll enjoy it.

I really like the concept behind the title of Cory Lavine’s album Out of the Blue. In his words: “Over the years, I, and maybe you yourself, have been inspired by people who’ve come in and out of your life. Many of these who I am referring to, came to us from out of nowhere. They came, Out of the Blue.” Who sent them? Where did they come from? How did they know when and where to find us, and why? Regardless if we ever find out the answers, I believe when we look deep within ourselves, we can often answer the reason why. This album is dedicated to all those who’ve inspired us to be our best, and to be sure we’re living out our lives to the fullest.”

These kinds of experiences and “chance” encounters have served as inspiration for Cory in his music and his life. A number of times since his youth he felt like giving up on his dreams, but someone or something was there to re-ignite his passion and determination. When he was only 9 years old and taking piano lessons, Cory was struggling with learning to read music. But his teacher saw the potential in him, and instead of giving up on him or sending him to someone else, she set about to learn the Suzuki Method of playing by ear so that she could teach it to him.

As Cory describes: “Seeing how difficult of a time I was having reading music (and with her love of teaching), she learned to teach a whole new way.” In addition to being a piano lesson, it was a life lesson that has stayed with him through the years.

He continued studying with this teacher into his teen years when he became enamored with synthesizers, drum machines, and computers and decided to stop with the formal lessons–not an easy decision on his part. When he graduated high school in 1990, Cory performed in a Top 40 rock band as part of Young American Showcase that did assembly programs in schools preaching against drugs and alcohol to accomplish one’s goals in life.

The touring was extensive and gave him exposure to new places and experiences. Eventually, he returned to college and earned a bachelor’s degree in music and sociology. All throughout these years, his Christian faith played an important role in the directions he chose. His road eventually led him to Nashville where he worked in the music industry for a number of years, and later in the hospitality industry, where the seeds of inspiration for a number of songs on this album were sown.

Although he started to drift from creating music, another chance encounter–this time with well-known pianist David Nevue, proved catalytic for Cory. As he tells it: David, who is a pianist and the founder of Whisperings Solo Piano Radio, was doing a workshop on his book, How to Promote Your Music Successfully on the Internet. It was being held at the Sound Kitchen, a prominent studio in Nashville. David, along with pianists David Lanz, Joseph Akins, and Philip Wesley were also there to perform. Although I had not heard of these pianists before, they really inspired me with their music and performance. I also loved how they shared the stories behind their songs. It was a really moving experience for me. Right then and there, I thought to myself, “I can do this.” From that point on, they inspired me to work hard and think about getting back into the music. And six years later, in September of 2015, I released my debut album, Out of the Blue.”

The opening track on this all-solo piano album is a light and airy tune, appropriately titled, “Riding The Wind.” The melody lifts you like a kite in a breeze and makes for a perfect intro to the album. The first song Cory composed for this album is “Give Thanks,” which was inspired by a meaningful connection he had with a family and their 3-year-old son who Cory met in the hotel he was working at.

As he shares: “Sometimes it’s the little things in life that make life meaningful and worthwhile. And for that, I give thanks.” The song captures a sense of childlike wonder and playfulness that is quite delightful.

A song called “Andante,” harkens back to the concept of this album, which I spoke about in the beginning. According to Cory: “Andante in musical terms means to play at a walking pace. Not too fast, or not too slow. So with this title, I decided to have “walking pace” refer to our walk in life. Because during our lifetime, we meet so many different people that have an influence on our life. Whether we meet these people in passing, or whether these people are with us for years, they can have a profound and lasting impact on our lives.”

Its hard not to be moved by the emotionally evocative song, “Child’s Wish,” that was inspired by Cory’s meeting a young girl who was in Nashville to go to the Grand Ole’ Opry with her family as part of the Make A Wish Foundation that grants wishes to terminally ill children. According to Cory: “She had no cares in the world. She was so happy to be in Nashville. Her wish was starting to come true!” In contrast to the lightness of the preceding songs, this one had a bittersweet quality that was visceral.

The creation of the title tune was one of those magical experiences that happens when a song appears out of nowhere, as it did for Cory one day when he sat down at the piano, hit record, and this song just flowed out of him, pretty much in one take. As he shares: “After I was done, I stopped recording, played it back, and just couldn’t believe what had happened. This song was far removed from anything else I had ever done before.” It’s a mature and expressive piece, which I also find impressive in the way it came about.

One of my favorite songs, entitled “Fly Away,” is about a dream both Cory and I shared as youngsters–the desire to be able to fly. Listening to this piece reminded me of that and also made me realize that all these years later, that desire is still there. Three more tunes, “New Day,” “Little Dance,” and “Reminiscing,” bring the album to a close.

Cory has a style on the piano that I found totally relatable, engaging, and enjoyable to listen to. I sincerely liked every song on the album. There is a good deal of heart and soul in his playing that reflects aspects of the experiences that have shaped him. It is inspiring to see how his life and music have come to this point. When I asked him if there was anything in particular that he wanted people to know about, he replied: “Find whatever it is you’re passionate about in life and go after it. Don’t let anyone tell you that you can’t be whatever it is you want to be in life. Don’t let anyone or anything stand in the way of you and your dream. Believe in yourself. Dreams do come true.”

This site uses Akismet to reduce spam. Learn how your comment data is processed.